Elements and their classification :

→ Newlands’ Law of Octaves : In the year 1866, Newlands arranged the elements known at that time in an increasing order of their atomic masses, he found that every eighth element had properties similar to those of the first. For example, sodium is the eighth element from lithium and both have similar properties. 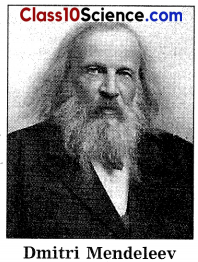 → In the modern periodic table, the elements are arranged in the order of their increasing atomic numbers. There are seven horizontal rows called periods 1 to 7. There are eighteen vertical columns called groups 1 to 18. The arrangement of the periods and groups results into formation of boxes.

→ Groups and electronic configuration : Characteristics of the Groups and Periods. Various properties of all the elements in a group show similarity and gradation. However, the properties of elements change slowly while going from one end to the other (for example, from left to right) in a particular period.

→ For example, the elements beryllium (Be), magnesium (Mg) and calcium (Ca) belong to the group 2, i.e. the family of alkaline earth metals. There are two electrons in their outermost shell the number of valence electrons are 2.

→ Similarly, there are seven electrons in the outermost shell of the elements such as fluorine (F) and chlorine (Cl) from the group 17, i.e., the family of halogens. While going from top to bottom within any group, one electronic shell is added at a time. From this, the electronic configuration of the outermost shell is characteristics of a particular group.

→ In the modern periodic table :

→ Valency: The valency of an element is determined by the number of electrons present in the outermost shell of its atoms, that is, the valence electrons.

→ Atomic size : The size of an atom is indicated by its radius. Atomic radius is the distance between the nucleus of the atom and its outermost shell. Atomic radius is expressed in the unit picometre (pm) which is smaller than nanometre (1 pm = 10 -12 m).

→ While going from left to right within a period atomie radius goes on decreasing and the atomic number increases one by one, that means positive charge on the nucleus increases by one unit at a time. However, the additional electron gets added to the same outermost shell. Due to the increased nuclear charge the electrons are pulled towards the nucleus to a greater extent and thereby the size of the atom decreases.

→ However, the positive charge on the nucleus goes on increasing while the atomic radius goes on decreasing and thus the effective nuclear charge goes on increasing. Therefore valence electrons are held with greater attractive force. This is called electronegativity. 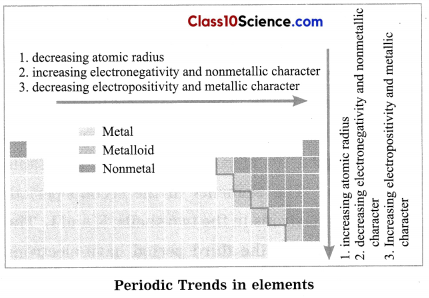 → Gradation in Halogen Family : The group 17 contains the members of the halogen family. All of them have the general formula X2. A gradation is observed in their physical state down the group. Thus, fluorine (F2) and chlorine (Cl2) are gases, bromine (Br2) is a liquid while iodine (I2) is a solid.