→ Reaction of metals with oxygen : Metals combine with oxygen on heating in air and metal oxides are formed. Sodium and potassium are highly reactive metals. Sodium metal combines with oxygen in the air at room temperature to form sodium oxide.
4Na(s) + O2(g) → 2Na2O(s)

→ Sodium readily catches fire on keeping exposed to air producing a lot of heat. Therefore, to prevent accident in the laboratory or elsewhere it is kept in kerosene.

→ Reaction of metals with acids : Metals react with dilute hydrochloric acid or dilute sulphuric acid to form metal chloride or metal sulphate and hydrogen gas. The rate of evolution of Hy is maximum in case of magnesium. The reactivity decreases in the order Mg > Al > Zn > Fe.

→ Aqua Regia: Aqua Regia is freshly prepared by mixing concentrated hydrochloric acid and concentrated nitric acid in the ratio 3 : 1. Aqua Regia is a highly corrosive and fuming liquid. It is one of the few reagents which can dissolve the noble metals like gold and platinum. 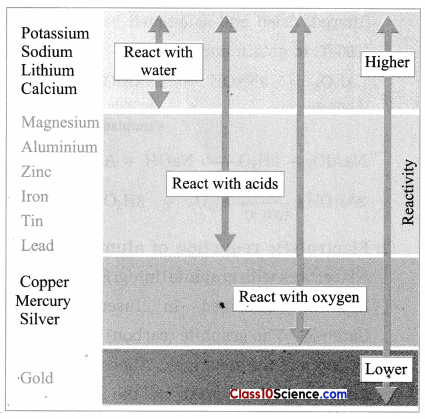 → Ionic compound is formed as sodium loses one electron while chlorine accepts one electron. Reaction of nonmetals with oxygen: Nonmetals combine with oxygen to form acidic oxides. In some cases, neutral oxides are formed.

→ Reaction of nonmetals with water : Non metals do not react with water, (Exception-Halogen). Chlorine dissolves in water giving the following reaction.

→ Reaction of dilute acid with nonmetals: Nonmetals do not react with dilute acids, (Exception-Halogen). Chlorine reacts with dilute hydrobromic acid to form bromine and HCI.

→ Reaction of nonmetals with hydrogen : Nonmetals react with hydrogen under certain conditions such as proper temperature, pressure and use of catalyst.

→ Ionic compounds : The compounds formed from two units, i.e. cation and anion are called ionic compounds. An electrostatic force of attraction between oppositely charged ions (cations and anions) is called an ionic bond.

→ Minerals and ores : The compounds of metals that occur in nature along with the impurities are called minerals. The minerals from which metals are extracted economically are called ores.

→ Metallurgy: The process of extraction of metal in pure form from the ores. The metals are further purified by different methods of purification. All this process is called metallurgy.

→ Separation based on gravitation : The gravitational method is used to separate the heavy particles of ores from the light particles of gangue. The processes to do this separation are as follows:

→ When a metal loses electrons the process is called an oxidation while when a nonmetal gains electrons, it is called a reduction,
Na → Na+ + e– (oxidation)
Cl + e– → Cl– (reduction)

→ Concentration of bauxite ore : Powdered bauxite is heated with NaOH under high pressure and at 140 °C to 150 °C for 2 to 8 hours in a digester Al2O3 being amphoteric in nature forms sodium aluminate (NaAlO2) which is water soluble. The iron oxide impurities does not dissolve in aqueous NaOH and are separated by filtration.

→ However, silica reacts with sodium hydroxide to form soluble sodium silicate. NaAlO2 is hydrolysed to form insoluble Al(OH)– by diluting it with water and cooling to 50 °C. Aluminium hydroxide precipitate is then filtered, dried and calcinated by heating at 1000 °C to obtain pure alumina.

→ Electrolytic reduction of alumina : Cell – A steel tank with graphite lining: Electrolyte – Alumina dissolved in fused cryolite; Cathode – The graphite (carbon) in the form of lining of the steel tank; Anode – Graphite (carbon) rods dipped in the electrolyte; cryolite (Na3AlF6) and fluorspar (CaF2) are added in the mixture to lower its melting point up to 1000°C.

→ Extraction of less reactive metals : The less reactive metals are at the bottom of reactivity series of metal. These metals are found in free state in nature. For example, gold, silver, platinum. The reserves of copper in free state are exhausted long ago. Copper is found mainly in the form of Cu,s. Copper is obtained from Cu S ore just by heating in air.
2Cu2S +3O2 → 2Cu2O + 2SO2↑
2Cu2O + Cu2S → 6Cu + SO2↑

→ Corrosion is degradation of a material due to reaction with its environment.
When old iron bars in the buildings are exposed to moist air for a long time, they acquire a coating of brown flaky substance called rust. (Fe2O3.H2O)

→ If copper vessels are not cleaned for a long time, they react with moist carbon dioxide in the air, lose their shine and gain a green coat of copper carbonate. (CuCO3)

→ When silver ornaments or idols are kept exposed to air for a long time, silver reacts with sulphur in the air to form a coating of black silver sulphide. (Ag2S)

→ The metallic parts of the body of old cars are corroded, eaten up and sometimes become perforated. The old cars also lose the original colour due to formation of flakes of rust.

→ By coating with some substance on the metal surface so that the contact of the metal with moisture and oxygen in the air is prevented and no reaction would occur between them.

→ By applying a layer of paint, oil, grease or varnish on the surface of a metal to prevent corrosion. For example, corrosion of iron can be prevented by this method.