→ Milk products, cheese, cocoa, pickles made from vegetables, wine and other beverages, bread, probiotic substances and cattle feed are produced with the help of microbes.

→ Applied microbiology is used for manufacturing various food products and medicines, using microorganisms on a large scale and hence it becomes useful for everybody.

The main features of industrial microbiology :

→ When the milk is converted into yoghurt, a small quantity of Lactobacilli culture is introduced into the warm milk. These bacteria bring about change in the constituents of the milk by fermentation and coagulation. This way yoghurt is produced. 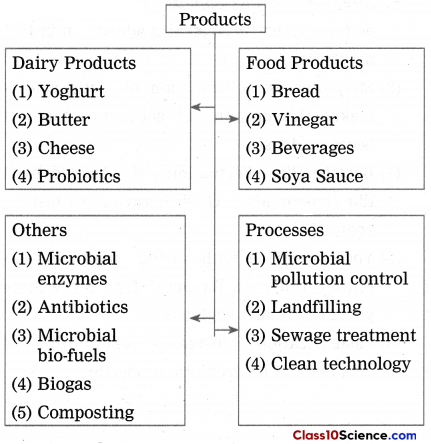 Method of industrial production of yoghurt :

→ Condensed milk powder mixed with milk for more proteins Milk is then boiled Cooled a little.
Streptococcus thermophilus and Lactobacillus delbrueckii bacterial strains added to it in 1 : 1 proportion.
Streptococcus Formation of lactic acid.

→ Butter is of two types : Sweet cream and cultured. For large scale production of cultured butter, microbes are used.

→ Mozzarella cheese is used for pizza. Cheddar and Swiss, Blue cheese etc. are used for burgers, Sandwich and other western foods use different types of cheese. E.g. Goat, Cheese, Camembert, Cotija, Chèvre, Feta, Emmental, Gouda, Taleggio, Parmigiano, Regginano, Manchego and Monterey, Parmesan are some of the cheese consumed world-wide especially in the Europe and America.

→ A type of cheese depends upon the milk from which it is produced. The acidity of that cheese, the colours and flavours added, the calcium content present in it are all such factors which decide the type of cheese. Some cheeses are very soft like cream cheese, while some are very hard e.g. Parmesan cheese. Thus, according to taste, flavour and the texture, the cheese become different.

→ Fungus Aspergillus oryzae is used to ferment the mixture of flour of wheat or rice and soyabean to produce soya sauce. Production of beverages : Coffee, cocoa, wine and cider are the beverages that are produced from Calfea arabica, Theobroma cacao, grapes and apples respectively. For this production various microbes are used.

→ Different enzymes secreted by the glands associated with the digestive system, help in the digestion of the food. The complex food components are broken down to simple absorbable substances due to the enzymatic action.

→ The pepsin and renin secreted by the stomach; amylase, trypsin and lipase secreted by the pancreas and peptidases and other enzymes secreted by the intestinal glands in the small intestine are the enzymes which bring about catalytic activity and help in the digestion.

→ Some examples of microbial enzymes are:

→ Industries that use microbial enzymes :

→ Some microbes are used in the production of amino acids. These amino acids are used in making commercial products. L-glutamic acid, citric acid, gluconic acid, lactic acid and itaconic acid are such amino acids which are prepared by action of certain microbes on some plant sources.

→ Substances obtained by microbial processing are as follows:

→ Their functions are respectively as follows:

→ Carbon compounds obtained from some bacteria and fungi which are able to destroy or prevent the growth of harmful microorganisms are called ‘antibiotics’.

→ It is dangerous to take antibiotics at our own will. They should be taken only when a doctor prescribes to take those. One should not purchase any antibiotic from medical stores without a prescription from a docton One should not use antibiotics according to own will to treat common diseases like a throat infection, common cold or influenza.

→ The dosage of the antibiotics as told by doctor, should be completed, and should not be left half way even if one feels well. Even if we find antibiotic very effective, we should not suggest antibiotics to other people. Antibiotics whose expiry date is over, should never be used.

→ Antibiotics are medicines obtained from different types of bacteria and fungi by carrying out certain processes. Some human diseases and veterinary diseases have been controlled due to antibiotic treatment.

→ Antibiotics which are used against Gram positive and Gram negative bacteria:

→ Bio-degradable substances such as animal and plant wastes, dung and urine of the animals, farm wastes, etc. are decomposed in the biogas plant.

→ The best quality manure and fuel is obtained from the biogas plant. The biogas contains methane, carbon dioxide and HS in small proportions.

→ The methanogenic bacteria present in the excreta of the animals bring about the decomposition of the waste matter.

→ Methane is obtained from microbes present in the agricultural and industrial waste, by microbial anaerobic decomposition. This reduces the problem of solid waste management.

→ Fermentation of molasses by yeast, Saccharomyces produces ethanol which is a clean, smokeless fuel.

→ The fuel of future is hydrogen gas. It is released when bacteria perform bio-photolysis of water. Bacteria perform the process of photoreduction to release hydrogen.

→ Some industrial chemicals are produced through microbial process. e.g. Some raw materials that are needed for the industrial processes, such as various alcohols, acetone, organic acids, fatty acids, polysaccharides. For plastic and food products some of these materials are used.

→ Bio-fuel : Biofuel is a good and renewable type of energy. They are easily available and in abundance, hence they are called reliable fuels of the future. Biofuel is available in the following three forms :

→ Microbial Pollution Control: With the help of suitable microbes, the problem of environmental pollution is tackled. Biogas, plant, compost production, sewage treatment, etc. are the measures in which microbes are used.

→ There are various causes of oil spills occurring in the marine waters. For example, accidents of oil tankers that transport crude oil, spillage through offshore oil wells, pollutants released through effluents from shore, etc. The oil spills form an oil film on the surface of water. It causes depletion of oxygen in the water. It also contains hazardous hydrocarbons which results in the death of fish.

→ The leguminous plants have root nodules in which the bacteria, Rhizobium resides symbiotically with the plants such as peas, beans, soyabeans, etc. These bacteria supply nitrates and nitrites and amino acids to the plants. They have capacity to convert nitrogen in the soil and air to form such compounds. This is called bacterial nitrogen fixation.

→ In return the plants provide energy in the form of carbohydrates and the place to stay in the root nodules to the bacteria. Some more bacteria and blue green algae such as Anabaena, Nostoc and Azotobacter, are free living in the soil, they too perform similar function of nitrogen fixation Both types of bacteria make the soil fertile and reduce the demand of chemical fertilizers.