→ Heredity : The transfer of biological characters from one generation to the next one with the help of genes is called heredity.

→ After the process of protein synthesis was discovered …

→ The benefits of science of heredity : 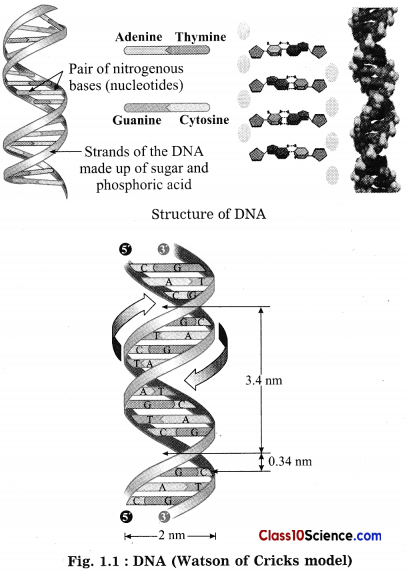 → RNA : RNA is nucleic acid taving single strand of ribonucleotides. Each ribonucleotide is made up of ribose sugar, phosphate molecules and a nitrogenous base. There are four types of nitrogenous bases, viz. adenine, guanine, cytosine and uracil. RNA is found both in nucleus as well as in cytoplasm.

→ According to the functions RNA is of the following three main types: mRNA, RNA and tRNA

→ mRNA carries the information for protein synthesis from genes on DNA chain in nucleus to the ribosomes in the cytoplasm. Therefore, it is called messenger RNA.

→ rRNA is the component of the ribosome. It helps in protein synthesis.

→ tRNA is present in the cytoplasm. According to the message of the mRNA, it carries the specific amino acid up to the ribosomes as per the message coded on mRNA

→ Examples: Disorders due to numerical changes in the chromosomes : 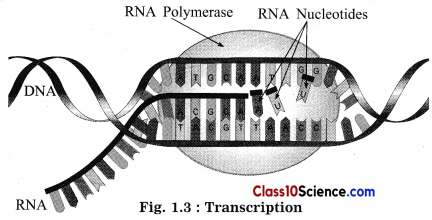 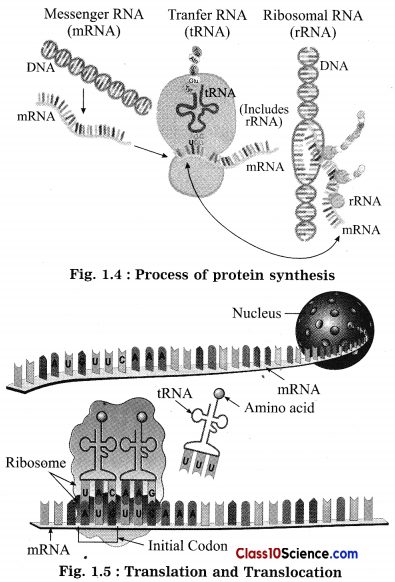 → The code for each amino acid consisting of three nucleotides, is called ‘triplet codon’.
mRNA formed in nucleus brings the coded message from DNA when it comes in cytoplasm. This message contains the codes for amino acids.

→ Dr. Har Govind Khorana, made an important contribution in discovery of triplet codons for 20 amino acids. He was awarded the Nobel Prize in 1968 for this work, along with two other scientists.

→ Thousands of triplet codons are present in each mRNA molecule. As per the message on mRNA amino acids are supplied by the tRNA.

→ Translation: As per the codon on mRNA, the tRNA molecule with complementary ‘anticodon’ is brought near mRNA, this process is called translation’.

→ Formation of peptide bonds: Every tRNA brings specific amino acid. These individual amino acids are joined together by peptide bonds with the help of rRNA.

→ Translocation: The ribosome keeps on moving from one end of mRNA to other end by the distance of one triplet codon. This process is ‘translocation’.

→ Many such polypeptide chains come together to form different and complex proteins. The proteins are essential for controlling various functions of body of living organisms. 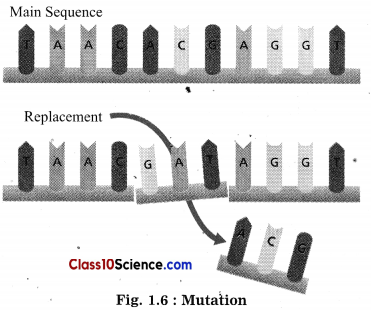 → Sudden change occurring in the genetic material is known as mutation.

→ Due to transmission of parental genes to offspring, there is remarkable similarity between parents and their offspring. But if there is mutation in any nucleotide then there are changes in the characters of the offspring. Mutations are of two types, viz. minor and major. Minor mutations can also bring about considerable changes. E.g.

→ Genetic disorders like sickle cell anaemia is caused due to mutation. Mutation is an everlasting process which leads to the process of evolution. It also offers proof for Darwin’s theory of natural selection. Appendix of human digestive system is a functionless or vestigial organ, Wisdom teeth are not useful for chewing the food.

→ Dinosaur could not adapt to the environment in which they were trying to survive. There was beginning of ice age which resulted in scarcity of food. The starvation was one of the reasons for extinction. According to one theory, a meteor collided with the earth and this resulted in catastrophic death of the dinosaurs.

→ There is continuous and rapid change in the environment which is causing threat to the natural habitats of the animals and birds. Pollution, climate change, increasing urbanization etc. are the factors causing depletion of food and shelter of animals and birds. Moreover, hunting and poaching has also resulted in extinction of many species.

→ The living organisms have been developed according to the following phases:

→ Evolution is an everlasting process of changes. The proofs to support this process are called evidences of evolution which are of following types:

→ Each important vital organ performs specific function which is necessary for survival. Brain controls and coordinates all the vital activities. Heart is responsible for the circulation of blood throughout the body. Lungs perform respiration.

→ Kidneys filter out nitrogenous waste products from the blood. In this way, each organ performs its own function. Only few organs such as appendix do not perform any function.

→ Fossil: Fossils are remnants of living organisms or their impressions which are preserved deep down in the earth’s surface. Various natural calamities buried organisms in this way. Fossils throw light on the evolutionary process as they offer direct evidence of evolution.

→ Carbon dating : Carbon dating is a technique to understand the age of a fossil. When alive, animals and plants consume carbon continuously but this process ends after their death. Later their body carbon in the form of C-14 undergoes continuous decaying process. C-12 is not radioactive. Therefore, the ratio between C-14 and C-12 changes continuously.

→ By calculating the following three aspects, the age of the fossil can be determined by knowing I. The time passed since the death of a plant or animal II. Measurement of the radioactivity of C-14. III. The ratio of C-14 to C-12 present in the body.

→ Willard Libby : Willard Libby developed the technique of carbon dating method which is based upon the radioactive decay of naturally occurring C-14. For this contribution he was awarded the Nobel Prize in 1960. In the journal ‘Radio Carbon’ the data about the ages of the materials determined is compiled and published.

→ Around 2 Crore years agd some species of apes started evolving in different direction.

→ Stages of human evolution and its time :