The different components in the ecosystem are as follows :

→ The birds on the tree depend on the aquatic organisms in the lake for their feeding. Birds stay on the trees which are in the vicinity of the lake, so that it is easier for them to capture fishes, frogs, etc. They must also be using the same lake water for drinking.

→ By utilizing the solar energy, the green plants perform photosynthesis. Thus, they are producers of the food chain. This food is consumed by the grasshopper. Thus, it is primary consumer. Frog is secondary consumer as its diet consists of insects like grasshopper.

→ Snake is tertiary consumer as it feeds on frogs, while the hawk is apex consumer as it can kill the snake and feed on it. Last picture in the food chain is of fungi which are acting as decomposers. Few bacteria are shown in the picture, act on all the levels and bring about decomposition. 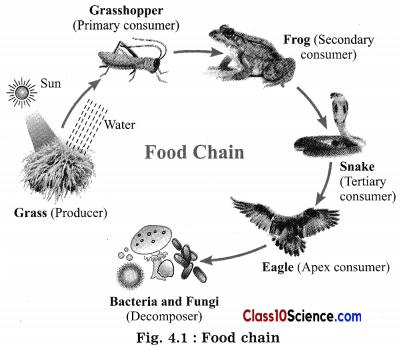 → If this food chain has to be converted into a food web, there should be interactions between the different components. Any living organism can be prey to different predators. Moreover, a predator can also be a prey for other. Frog eats different insects. The same frog can be either eaten by snake or by hawk.

→ Only by the decomposition process, foliage in forest, dead trees, and carcasses are sent back to nature. If such decomposition halts for years, the entire earth will be covered by heaps of unwanted garbage. The entire balance of nature would be lost.

→ ‘Jivo Jivasya Jivanam’ is a Sanskrit saying which means that one living organism makes the living on the other. All the food chains occurring in the nature, function on this principle. Prey and predator interactions are based on the above concept. While discussing, students should give various examples that occur in their surrounding environment.

→ Energy pyramid is the diagrammatic representation, that depicts the energy levels at the various trophic levels. There are interactions in the form of energy transfer in all the food chains and food web. The energy pyramid shows how energy travels up a food chain.

→ The bird is a part of both the ecosystems. For shelter, the bird builds nest on the tree. That means it takes advantage of tree ecosystem (terrestrial ecosystem). Moreover, it feeds on the fish from the pond. Being a predator, the bird maintains the fish population of the pond and thus it also becomes the part of the pond ecosystem too.

→ Complete the chart: Fill up the blank boxes and display the completed chart in classroom. (Answers are directly given in bold print.)

→ Due to increase in their population the paddy production will be reduced. Due to reduced number of snakes, rats and other rodents from neighbouring areas would also rise, which are also secondary consumers.

→ If frogs’ population declines, there would be imbalance of entire ecosystem. The number of prey and predator populations will change and thus the food chain will come to an end. Everything that is around a living organism is called environment. Environment includes physical, chemical and other natural factors which surround the living organism.

Relationship between Environment and Ecosystem :

→ Continuous interactions occur between all the factors in the environment.

→ The natural as well as artificial or manmade factors affect the environment. Among natural factors, the sudden changes in the weather, the different types of natural disasters, etc. affect the normal environment. Due to such changes there are problems in the interrelationships that exist between food chain and food web.

→ Due to various man-made causes, there are extreme destruction of environment. Industrialization, the pollution due to such industries, Urbanization, hunting and poaching of wild animals, construction of dams, roads, bridges, etc. are all man-made changes that cause lot of damage to environment.

→ If there are industries established on the river bank, then there is threat to the aquatic ecosystem. It is most likely that the hazardous effluents can be released into the river water. This can cause water pollution resulting into mortality of aquatic organisms.

→ Moreover, this water will no longer remain potable. Hence the health of resident population may also be affected. The food chains and the food web in the river may be terminated due to such pollution

→ The environment is affected due to some natural factors of environment and some man-made factors such as pollution. Such factors create imbalance in the environment which in turn affect the existence of biota. Earth is suffering from many environmental problems caused due to effect of various natural and artificial factors.

→ Environmental pollution : Pollution brings about environmental degradation. It is largely due to natural or man-made causes. Pollution contaminates and makes the unnecessary and unacceptable changes in the surrounding environment. This causes direct or indirect changes in physical, chemical and biological properties of air, water and soil. These changes are usually harmful for all living beings, including human.

→ Reasons for pollution : Population explosion, fast industrialization, and indiscriminate use of natural resources, deforestation, and unplanned urbanization are factors that pollute environment.

→ Our responsibility : Pollution of air, water, noise, soil, thermal, light pollution, etc. are different types of pollution that cause adverse effects. It ultimately affects existence of all the living organisms on the earth. Thus it is our responsibility to curtail polluting substances and aim at environmental conservation.

→ Major mishaps on the international level: Chernobyl, Windscale, and Three Miles Island mishaps. Due to these accidents thousands of people have been affected for long term.

→ Jadav Molai Payeng from Assam has made barren land into a forest which now stands on 1360 acres of land. Now, this forest is known as ‘Molai Jungle’. It is rightly said that “Many people come together to destroy the forest, but a single person, if determined, can establish a new forest”! We must also have such a vision.

→ Environmental pollution affects the living organisms and reduces biodiversity.
Living world had a rich biodiversity. This richness of biodiversity is getting depleted at a very high rate only due to various activities of human beings.

→ Biodiversity: The richness of living organisms in nature due to presence of varieties of organisms, ecosystems and genetic variations is called biodiversity. Biodiversity occurs at following three different levels.

→ Every ecosystem is different from others. It has its own characteristic animals, plants, microbes and abiotic factors.

→ How can biodiversity be conserved :

→ If as per report of WWF, 30% of the animal species faced extinction during last 30 years, then it is very alarming. Once lost the flora and fauna will never get replenished. If in future, this rate of extinction continues, there will not be a single animal left on the earth. Only human species will outnumber all others due to no concern for the nature.