→ Disaster is the incidence that occurs suddenly causing heavy damage to life and property. The disaster can be man-made or due to natural reason.

→ On September 2019, there was a heavy downpour in Pune. This disaster has been experienced recently.
On 26th November 2008 there was attack at several places by the Pakistani terrorists. The stories about the deaths and damage caused by this disaster were seen in films and learnt about this from our elders.

→ Due to a heavy downpour in Pune, there was waterlogging in all the shallow areas. All the transport systems collapsed on that day. Large trees fell down injuring the people. The water logging causede condition like floods. Schools, colleges and offices were shut down. People were caught in troublesome situation.

→ On 26th November 2008 many innocent people lost their lives. There was tremendous damage caused to some of the important places like Taj Palace Hotel and Chabad house.

Disasters can be classified depending upon following main criteria.

There are three types of disasters, viz. geophysical, biological and man-made.

→ The flood waters uproot the trees, the houses collapse due to surge of water. The fields get waterlogged. The water does not recede. The cattle die of asphyxiation by drowning. Since everything is under water, the process of decomposition begins at a higher rate. This may spread the epidemics of the diseases.

→ In dry famine, there is scarcity of water. The crops die as there is no proper irrigation. There is severe food shortage. Due to dearth of water, the cattle die and human beings are forced to migrate.

→ The earthquake is responsible for large scale devastation. The houses collapse. The roads are damaged making the transportation impossible. The electricity and water supply is disrupted due to damage. There is large scale damage to lives and property.

→ The largely spread fire of the dry grass, shrubs and trees in the forest due to heightened temperatures is called forest fire. The effect of forest fire on the environment is greatly devastating. Biodiversity is lost. Plants and animals die due to fire. The vegetation becomes dead as the plants turn into ash. The atmosphere is full of smoke and hence causes air pollution.

Effects on the economy of the nation and local leadership

Nature and scope of disaster :

For this following aspects have to be studied thoroughly :

The scope of the disaster is dependent on the following facts :

→ Three sensitive phases of the disaster:.

→ Most of the natural disasters have taken place in the Asian continent and region of Pacific Ocean, causing huge of loss to the life. These disasters are caused due to natural imbalances created by human beings, in the pursuit of development and the economic progress. Environmental degradation is the leading cause to natural calamities.

→ Population explosion has resulted into many problems. After the Second World War, the natural conditions on the earth have gradually changed due to human interventions. Different causes such as economic inequality, racial and religious differences have caused terrorism, abduction, social differences which in turn result into instability in nations and man-made calamities.

→ Post-disaster management means helping the victims of disasters in all possible ways, after they are affected. Rescue work is done by local survivors. Controlling centres and help centres are established according to the type of disaster.

→ Materials provided from the control centres for the victims are categorized, and distributed the same to victims with continuous review of the help.

→ Natural disasters cannot be avoided. But by proper management, the loss can be minimized. Man-made disasters can be avoided if care is taken in our actions and behaviour. It is the ethical responsibility of all human beings, to help each other during disasters. 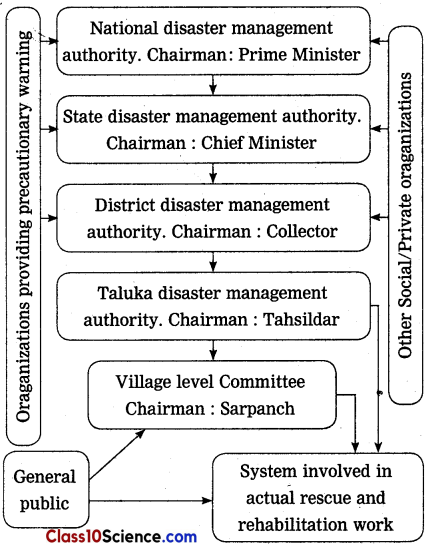 → District Disaster Management Authority: Planning, coordinating and controlling the implementation of rehabilitation programme is done by District Collector. He is responsible for such programmes and schemes.

The international organizations that work in the field of disaster management :

→ The injured person should be helped and kept in a resting position in which he or she is at ease. Depending upon the nature of the disaster, first aid given may be different. But the most important is timely rescue which can help the victim to survive.

→ When suddenly any disaster takes place, the help given to the victims before the medical treatment is available, is called first aid. This knowledge of first aid becomes useful to save one’s life.

→ In day-to-day life, we come across many such disastrous incidences where such help is needed. Varieties of disasters like accidents, stampede, injuries in fighting, electric shock, burns, heat shock, snake bite, dog bite, fire due to electric short circuit, epidemic of any disease, etc. are the disasters in which first aid becomes essential

→ In disasters, the victim’s condition is to be taken into account before starting any furst aid. As per the condition, various transportation methods like cradle method, carrying on back, carrying on two hands are to be followed.

→ Sometimes we face the disaster due to our own unawareness. We have to watch out for the symbols that warn us against the potential dangers. Such symbols have to be taken into account.

→ First Aid Kit : Material necessary for first aid is kept in the first aid kit. Such first aid kit should be available at every place such as in schools, colleges and offices, etc.

→ Mock drill is organized in various schools to create the awareness among the school children in case of disasters. Fire fighters, police force and some voluntary organizations organize mock drills.

Important notes for our safety