→ The chemical bond formed by sharing of two valence electrons between the two atoms is called covalent bond. 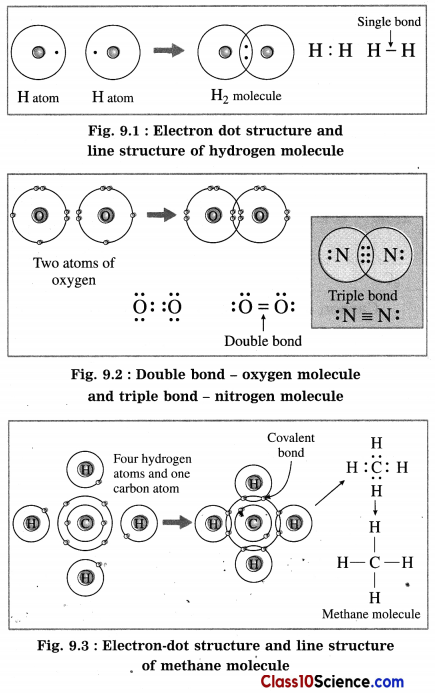 → Carbon: A versatile element : In short, the entire living kingdom is made from carbon. Carbon is the basic ingredient of our body. Millions of molecules ranging from the small and simple methane molecule to the extremely big D.N.A. molecule are made from carbon. The molecular masses of carbon compounds range up to 1012.

→ Carbon has a unique ability to form strong covalent bonds with other carbon atoms; this results in formation of big molecules. This property of carbon is called catenation power.

→ Carbon being tetravalent, one carbon atom can form bonds with four other atoms (carbon or any other). This results in formation of many compounds. These compound possess different properties as per the atoms to which carbon is bonded.

→ In the course of millions of years the reserves of crude oil were formed from the dead organisms buried under the sea floor. This crude oil and natural gas are now recovered from the oil wells. The natural gas is mainly methane. 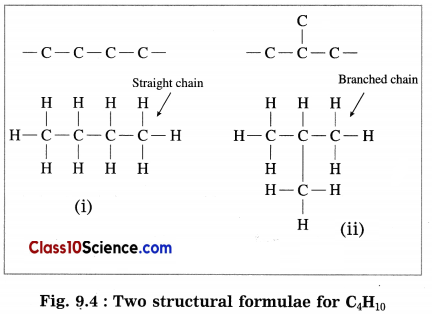 → The closed chain of carbon atoms are present in some carbon compounds, wherein, rings of carbon atoms form. For example, the molecular formula of cyclohexane is CH and its structural formula contains a ring of six carbon atoms. 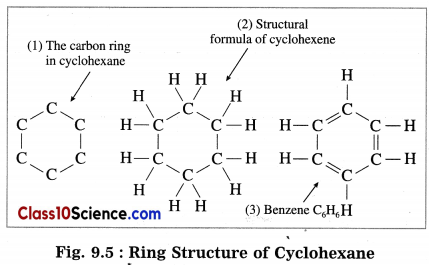 → Benzene is a cyclic unsaturated hydrocarbon. There are three alternate double bonds in the six membered ring structure of benzene. The compounds having this characteristic unit in their structure are called aromatic compounds.

→ Homologous series : The length of the carbon chains in carbon compounds is different, their chemical properties are very much similar due to the presence of the same functional group in them. The series of compounds formed by joining the same functional group in place of a particular hydrogen atom on the chains having sequentially increasing length is called homologous series. Two adjacent members of the series differ by only one – CH2 – (methylene) unit and their mass differ by 14 units.

→ Chemical properties of members of a homologous series show similarity due to the presence of the same functional group in them.

→ While going in an increasing order of the length there is gradation in the physical properties, i.e. the boiling and melting points.

→ IUPAC nomeclature system : International Union for Pure and Applied Chemistry (IUPAC) put forth a nomenclature system based on the structure of the compounds, and it was accepted all over the world. There are three units in the IUPAC name of any carbon compound : parent, suffix and prefix.

→ Combustion : Methane undergoes combustion in the presence of oxygen to emit heat and light to form carbon dioxide and water.

→ Oxidation : Ethanol gets oxidised in the presence of alkaline potassium permanganate to form ethanoic acid.

→ Ethanol : Ethanol is a colourless liquid at room temperature and its boiling point is 78 “C. Generally ethanol is called alcohol or spirit. Ethanol is soluble in water in all proportions. When aqueous solution of ethanol is tested with litmus paper it is found to be neutral.

→ Ethanol being good solvent, it is used in medicines such as tincture iodine (solution of iodine and ethanol), cough mixture and also in many tonics.

→ Methanol (CH,OH), the lower homologue of ethanol, is poisonous, and intake of its small quantity can affect vision and at times can be lethal. To prevent the misuse of the important commercial solvent ethanol, it is mixed with the poisonous methanol. Such ethanol is called denatured spirit. A blue dye is also added to it, so that it is easily recognised.

→ Dehydration reaction: When ethanol is heated at the temperature 170 C with excess amount of concentrated sulphuric acid, to form ethene, with elimination of water molecule.

→ Esterification reaction : Ethanoic acid reacts with ethanol in presence of an acid catalyst, ethyl ethanoate (ester) is formed. This reaction is known as esterification.

→ Esters have sweet odour. Esters are used for making fragrances and flavouring agents. Saponifaction: When an ester is reacted with the alkali sodium hydroxide, the corresponding alcohol and sodium salt of carboxyclic acid are obtained.

→ This reaction is called saponification reaction, as it is used for preparation of soap from fats. Ester + Sodium hydroxide → Sodium Carboxylate + Alcohol

→ When fat is heated with NaOH solution, soap and glycerin are obtained. 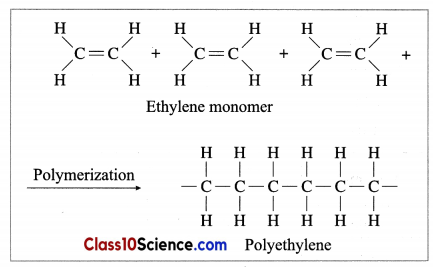 → Various polymers and their uses: 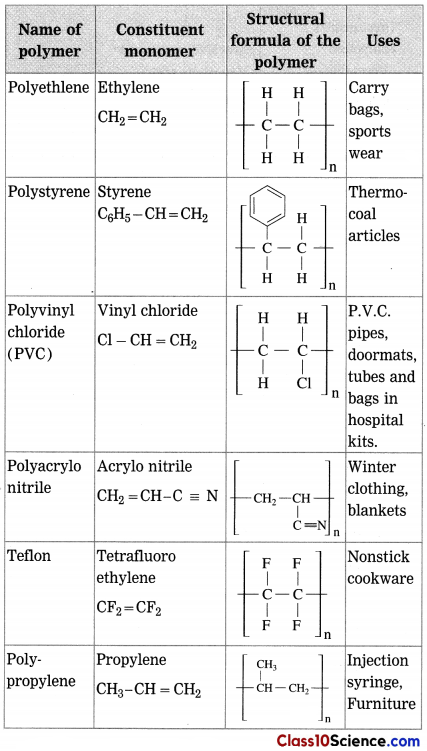 → The polymer’s in the above examples are formed by repetition of single monomer. These are called homopolymers. The other type of polymers are formed from two or more monomers. They are called copolymers.

→ For example, PET is poly ethylene terephthalate. The structures of polymers are linear as in the above examples or they are branched and cross linked as well. Polymers aquire various properties as per the nature of the monomers and the type of structure.

→ Some natural polymers and their occurrence : 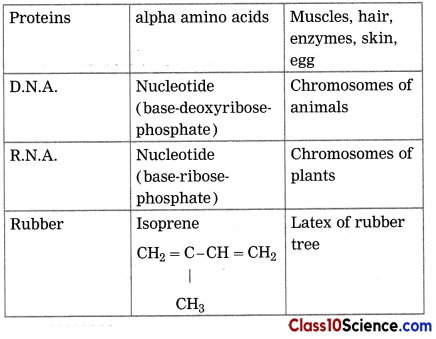